It was great to see so many parents from this year’s Reception classes show up for the meeting – and a Cygnus parent, Irene (mother of Meadow) has stepped up to organize a healthy snack stall for Sport Relief on Friday 18th March. Thank you, Irene, the day is duly saved. Please, everyone, help her out by donating as many tantalizing-yet-sportingly-nutritious refreshments as you can muster (okay, popcorn is fine! And fruit kebabs never, ever, ever lose their appeal).

Don’t be a Messi eater for Sport Relief this Friday…

The HSA committee is still thin on the ground, though: more people are needed to take charge. Clearly, plenty of parents from the new intake are now thinking seriously about how they might like to get involved, which is great. For a start, do come along to the Tufnell Park Tavern on Wednesday 20th April at 8:00pm for an informal get-together with drink and food provided.

We’ll also be detailing vacancies widely and regularly from now on – in PACT folders, on the HSA noticeboard at school, by email and on this site. For instance, there must be SOMEONE on our parent body who can design our twice-termly, two-sided, A4 newsletter…! If you’ve never seen one, that’s because production has stopped until a designer can be found.  Here’s what they used to look like before the parent who designed them left (we’ve still got the writer):

Has anyone out there got InDesign at home? Could you do your own version? Get in touch!

It also became clear that lots of parents still do not know about this blog, or that you can follow us on faceBook. Please, if you ever talk to a Tufnell Park parent who declares themselves baffled about school events, urge them to check it out. They need never be in the dark again. 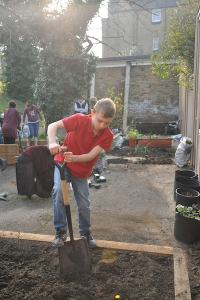 Our kids showed at Give & Gain last Friday afternoon what brilliant little gardeners they can be. Bring them along on Sunday 20th March at 1:30 to plant crops in that freshly-dug earth.

Finally, there was a lively discussion about possible Learning Treats for this year and next. It’s a great shame that we’ve only managed one so far in 2015/16, compared to three each year in 2013/14 and 2014/15. With luck, some of the great ideas people came up with – ranging from recycling and the environment to orchestral music – will come to speedy fruition, if there’s a parent championing the cause. 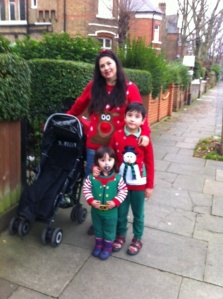 Christmas came in all sizes on the way to school on Friday.

So… term ended spectacularly Christmassarily: jumpers, jumpers everywhere, with legion lights, baubles, robins and reindeer.  It was as if good taste had never been invented – fun and fabulous! – as well as raising a lovely chunk of money for Save the Children, MacMillan Cancer Support and Make a Wish, in equal measure.  In the New Year, we’ll be able to tell you the exact size of the donation.

The day – and the term – finished with the Tufnell Park Nativity: an altogether excellent production this year, with particularly lavish sets and costumes, great singing and very impressive delivery from all the speaking parts. For all of which, the HSA can claim pretty much no involvement – except that they are, of course, your children – and that photographer and parent, Michael Preston, kindly sent us the pictures, so you see them here first…

Put-upon donkey and peace-making sheep have larger roles in our play than in any of the gospels.

He’s flashy! Nativity director Mr Gulliford may be taking the strain, but he’s doing it in style.

Woah, Angel Gabriel! Chicken, Sheep, Donkey and Mary (as in the original) receive a celestial visitor.

Local Centurians are less than sympathetic to the couple’s plight.

Nor is the lowly inn-keeper: “I don’t like wives and I don’t like children!” may be the best Nativity line ever.

Luckily the world’s first Christmas presents are on their way.

Only, the wise men stop first at the wrong palace…

Shepherds are next for an angel visitation.

Here they are! The heavenly host!

With loads of little stars behind them…

…Cygnus are always a star turn!

Mr Scarborough seems as overwhelmed by events as anybody.

And Chicken lays an egg.

Take a bow, everyone! And a very merry Christmas to you all. 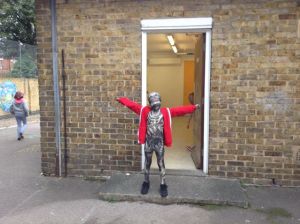 The whole school pulled together to make a massive success of the first Fundraising Friday.

Donations from Halloween dress-up raised c. £180 (final figure tbc), while the afterschool sale of Spooky Snacks, plus “Guess the Weight of the Pumpkin”, brought in a giant £223.93.

What a truly incredible effort, resulting in at least £403.93 to be shared between Cygnus class and the playground supervision team, who are going to buy toys and games for children’s break time.

Thank you so much, all you super-creative parents and families, for helping the children produce fabulous outfits, and for providing truly spooky snacks for sale. Take a good, long look at the gallery of photographs from school assembly, plus snaps from the playground before and after school (below).

Just a normal day in so many ways, only…

Come on, children – there’s learning to be done.

No wonder there was such a spooky scrum!

Cheesy broomstick with chive: there were plenty of non-sugar options.

Or just buy a balloon.

With lovely Cygnus teachers running it,”Guess the weight of the pumpkin” proved a popular option.

And the day finished most satisfyingly with a lucky winner on the spot.

Has it come to this? Looks like we’re selling body parts to raise cash for classes…

…and indeed, frankfurter fingers will be among the Spooky Snacks on offer at the after-school not-just-cake sale in aid of Cygnus class this Friday, 23rd October.

Of course, the kids eating them will probably look the part, as it’s also a Halloween dress-up day to help raise money for playground toys. There’s many a young witch or ghoul will be dying to get their gnashers into one of these.

Stand by tomorrow evening for photos – if you dare… (and please send some, if you take them): WO-A-HA-HA-HA-HAAA!

The editorial team never rests… even during picnic time.

The great outdoors – so over-rated, right?

All was cosy and calm at the Welcome picnic for Cygnus and the Nursery today… driven into the school hall at the last minute by a rainstorm over Tufnell Park from precisely 15:20-15:50. You can probably still find the odd tie-dye patterned balloon hanging in Dalmeny Park, missed by the organizers as they fled…

Nonetheless, with blankets and floor mats, colouring pens, loads of lovely food and balloons to kick about, there was plenty of fun to be had.  Thanks so much to everyone who came: it really was great to meet you.

Come again on Friday 9th October, 3:45pm for the HSA AGM in Andromeda Class.  That’s the way to have your say.

“Children, this is a Twiglet – once tried, never forgotten.”

And there were plenty of healthy options.

Ms Tizard didn’t mind doling out the odd crisp, too.

Balloons on the go!

Out come the colouring pens, and it’s time for some serious concentration. 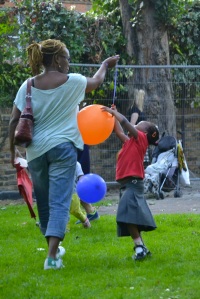 We can’t guarantee the sunshine… but there are ALWAYS balloons.

This year’s nursery and reception children are all at school by now, and it’s time to welcome them with the annual picnic at Dalmeny Park.

If you haven’t got a child in Cygnus or the Nursery, you can still help… a lot.  By all means feel free to:

It looked like rain last year and we got brilliant sunshine by 4:00pm, so let’s hope for a repeat! If the heavens do open, we’ll picnic in the school hall. 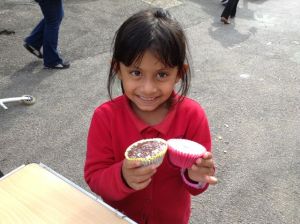 Today’s cake sale made £117.00, and Ms Williams has already snapped up the cash to spend on all the children in Reception.

Thanks so much to everyone who donated goodies and who helped set up and run the stall.  And let’s not forget all you noble souls who bought cakes, and ate them.

An outdoor cake sale is always festive, isn’t it? Thanks to the new Indoor Hockey club, which will need the hall on Fridays for the rest of term, it looks as if all remaining cake sales will be outdoors.

Just look at the love in these!

Wonderful Ms Williams living large, snapping up cakes AND cash on behalf of her children!

How wide can you go?

Lovely, lovely cake sale ladies: there would be no cake sale without you. 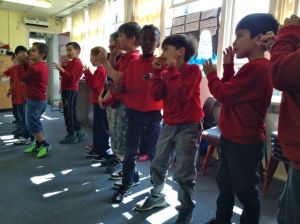 It’s not news that the mobile’s alive with the sound of music, where Ms Brereton takes her classes: that’s a normal part of school life.

But there’s a new purpose to rehearsals these days, as you may have noticed if your children have come home recently singing the hits of bygone eras. Funded by the HSA, Ms Brereton has taken charge of a brand new Music Learning Treat, which will involve the whole school producing a CD of songs from the last 100 years. There’s a CD cover to design, too, and we expect recording to take place sometime in July, just before the end of term. Keep your ears open…

Eating smarties makes you smart, which is why we sell a lot at school. Buy more if it’s not working yet.

More immediately to hand is the Cygnus cake sale, coming THIS FRIDAY.  Please bring cakes and other goodies to sell, as all the cash we make will go direct to the Reception teachers to spend on whatever their classes need. You’re welcome to bring savoury and fruit snacks, too.  Children do like them. 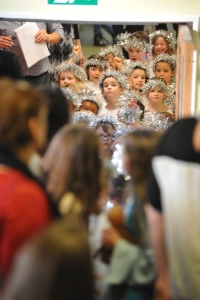 A host of little stars file into our packed hall for the grand finale.

Drama teacher Phil stuck with the well-loved Tufnell Park finale, though, as Cygnus joined the rest of the cast on stage for a sparkling finish.

Take a look at the school site for many more pictures – and thank you to Finn’s Dad, Michael, for those (and these). 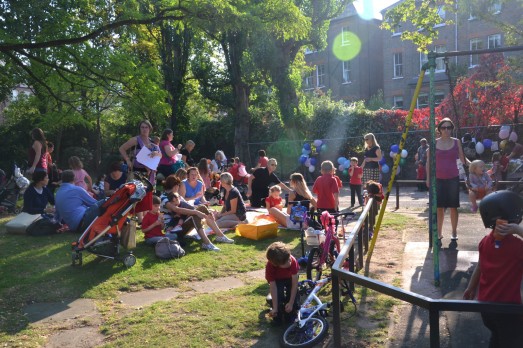 And so it came to pass… the sun did shine, and it was lovely to see so many new faces – and older siblings – at the Welcome picnic today, accompanied by the happy shouts of children playing, and the gunshot salvo of 70-odd balloons bursting at random. It was a wonderful afternoon.

You’re never too young to sign up for the HSA.