Just four days after our most successful summer fair ever, it was a tired but happy committee that trooped into the last meeting of the school year. Early indications are that the Seaside Special Summer Fair brought in over £3,000 profit, smashing all previous records.

The HSA’s accounts are published every year at or after the Annual General Meeting – come along to this year’s AGM on Thursday 2nd October at 3:45pm to have your say about how money gets spent and how we raise it. We’re growing every year, so more and more people need to take a role or get involved in a project if we’re to keep up our current level of success. 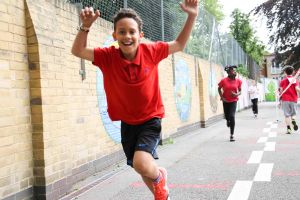 HSA events during 2013/14 – such as another successful fun run – gave us plenty to celebrate.

The summer fair isn’t the only big earner of the year: another successful Children’s Fun Run raised more than £3,000, specifically ring-fenced for a memorable school trip for every child.

Even with this impressive effort, the funds work out at around just £10 per child and there was considerable discussion about what kind of trip we will be able to offer. We are hopeful that, given the number of tickets we’d be booking, we will be able to get a substantial discount for popular London attractions or theatre shows (for example). If you have an inspired idea for a trip or think you could help us get a great experience at a bargain price, please get in touch.

We also ran through plans for September, as the HSA will have to hit the ground running in the new term: there’s so much going on! The Adults’ Fun Run planned for Friday 12th September can’t be confirmed until after 1st September, when Islington Council will finally take bookings for Tufnell Park Playing Fields. We’re thinking positive: watch this space for confirmation, and don’t stop training.

Other September dates are the Welcome Picnic for children in Cygnus, after school on Thursday 18th September, and Tufnell Park School’s much-loved International Evening on Thursday 25th September. It’s going to be another fun, busy year. Once again: come to the AGM on Thursday 2nd October at 4:00pm – it’s our most important meeting of the year.