Columba class has topped the year’s cake chart by raking in £100 at today’s sale, making them the single highest earning class since cake sales began (well, since September 2013). It’s up to Cygnus & Orion to take up the challenge on Friday 13th June.  Unlucky for some, maybe, but it’s the last class cake sale of the year…

A cupcake for the princess. 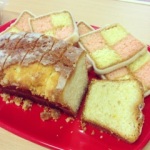 The battle of Battenberg –

You can’t lose, only win.